"Twice and thrice over, as they say, good is it to repeat and review what is good."


Plato's thoughts resonated in my mind as I embarked upon the mission of reviewing this wonderful app called WeChat. A big thank you to BlogAdda and the sponsored reviews program for giving me this opportunity to review this product. Ok then, let's get on to the review part straightaway.


I downloaded my WeChat app from Google play store. After a brief installation process, the app asked me to enter my cellphone number and whether it should 'find cellphone contacts using WeChat'. Here arises the first difference between WeChat and Whatsapp, a competitor app which I've been using for over 2 years now. In WeChat, the user has to manually add the contacts to their list, even if they are present in your phone list. After the initial searching done by the app, it just shows which contact has the app installed and which ones need an invitation. However, in the case of Whatsapp, the app automatically syncs and adds the contacts to the list. A very minor but quite a significant difference in terms of usability and convenience to the user.

Upon finishing with the installation and syncing, I was presented with the home page of the app and I realize that this app packs in a lot of stuff under its hood. The whole layout of the app has been divided into four broad sections or tabs - Chats, Contacts, Social and Settings. The user can select the background of their choice for all chat screens either by using the available ones or by uploading your own photos. There are a host of Emoticons available for the users, that too of three different shapes, sizes and forms. Clearly, the developers are focused on increasing the enjoyment quotient of the users.


Talking about features, this app has plenty to boast about. So, let's take them up one-by-one. 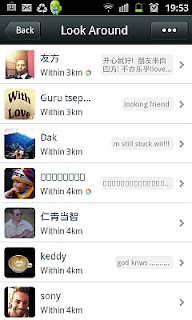 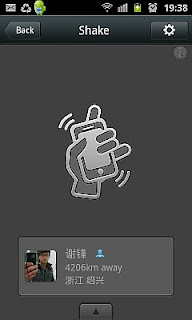 
The highlight of the app is perhaps the voice and video calling features and the voice message functionality.
The voice message button has been conveniently placed right beside the option for the on-screen keyboard to make it easier for the user to use the function.

Just press the button to start recording and release to send once you are finished saying. Even though Whatsapp has this feature already, I found this method quite handy and fast. In case of Whatsapp the user has to go deep into the menu to bring up the voice message option, however, in WeChat, this takes place in an instant. The difference in time comes in handy when your hands are tied up with work or you want to convey something really quick, the app scores brownie points here.

Available for version 4.2 onwards, the video call feature is well thought-out. While calling a contact, the user can select whether to place a voice call or a video call. Even after placing the call, the user can opt to switch between the two at any point of time by using a slider. This is a feature which I did not find in apps like Tango or Skype. Whatsapp does not support video calls as of now. However, the user can only place a video call if both the sender and receiver are using wi-fi, else the system informs that you can only make use of voice calls. The reason for this is that over a data connection, the video call would eat up more of your bills by increasing the data counter.

The voice quality of both the video as well as voice call was surprisingly clear, though the volume was quite low and did not increase beyond a certain level. I carried out voice testing on both Wi-Fi as well as 2G & 3G data connection. The voice quality was in fact better than Tango, although not similar to a phone call.


While using the app, I noticed that the battery got drained out in lesser time than it would take usually. Also, the time stamps for the messages which are sent and received need to be looked into. The app does not show the time of sending and receiving for each message and rather shows the time over a broader scale.  Whatsapp has done this for each message which is sent. Another thing which is present in Whatsapp but not in WeChat is the online status of the contact. There is no way of knowing whether your contact is online or not. The developers claim this in the FAQ section of their site as well, though, they claim that it protects the privacy of the person at the other end. I do agree, but this way, all you can do is send a message and wait for eternity for the contact to reply. You have no control over the conversation as you don't even know whether the contact has seen the message or not. Whatsapp is more real time on this parameter, so much so, that it has completely reduced the usage of SMS.


All in all, the WeChat app is fun to use with a plethora of social networking opportunities and options available. Group chat is fun and will ensure that you and your friends have a great time. If you do get bored, head over to Shake to chat up with a stranger, although you might find more Chinese in that section. The complete package of WeChat is promising and has the makings to become an outstanding app.
On a scale of 5, I give this app a rating of 4 and even though I would still continue using Whatsapp, WeChat has made its place in my cellphone. Go ahead, download and experience WeChat.

Head over to the WeChat homepage:
http://www.wechatapp.com/en/

This review is a part of the Sponsored Product Reviews Program at BlogAdda.